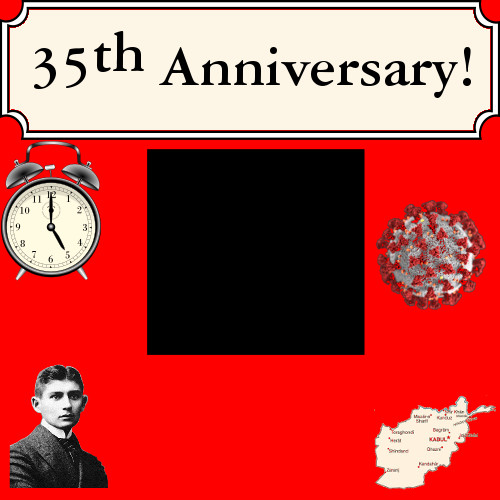 This was the 35th anniversary of this radio program. It really started on September 8, 1986. So we celebrate the first time that we're on in the month of September. We talked a little bit about the istory of the radio program. R. Paul read "Before the law" by Franz Kafka.

Apparently we spent over $2 billion on the war in Afghanistan. I'd noted on a previous program that a huge amount of equipment was given to the Afghan military. All of that stuff, which we the American tax payers paid for, is now in the hands of the Taliban. They have an air force now, but it’s not much of one. Apparently the Americans disabled a lot, but not all, of the stuff that was left behind. The Taliban are whining about it. And there was a big flap about them hanging a guy from a Blackhawk chopper. Turned out it was a Taliban idiot who was trying to hang a sign or a flag or something.

We talked about Biden bombing the ISIS-K crowd.

We talked about the outrageous Texas anti-abortion law, and the right-wing of the Supreme Court refusing to grant a temporary injunction. Yeah, we knew that they were corrupt when they got appointed. Now their corruption gets to fully flower.

There is a Web page for this program.