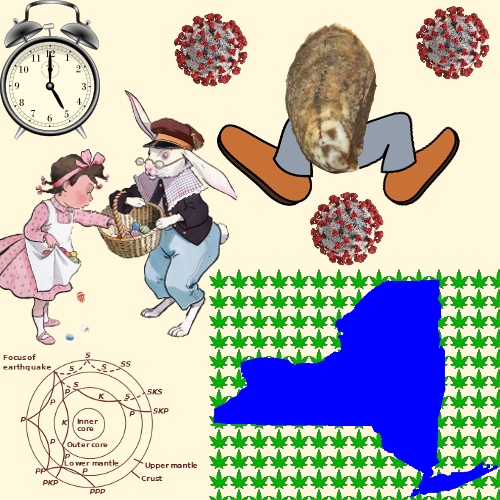 We talked about states opening up more and more public businesses and event, and how this sounds like a bad idea to do at this time. We talked about opening day for baseball being affected by the pandemic, and we related Casey Stengel and Micky Mantle testifying before Congress to the approach some politicians have to dealing with the pandemic.

Pickles of the North talked about the origins of Easter and ow it came to be that bunnies were laying eggs.

We talked about researchers at the Australian National University (announcing that they have discovered a new layer of the Earth. They say it's located within Earth's inner core. So there are now five layers to the Earth. We mentioned "hollow Earth" hypotheses, which have all been thoroughly debunked.

We talked about marijuana now being legal in New York State. We discussed it being one thing for people to use it but another thing for people to force others to use it. We talked about how marijuana has a real stink to it these days, and wondered what it'll be like after the pandemic eases and more people are wandering around smoking it in public? And of course all of those people will be loaded. We compared disinhibited drunks and disinhibited marijuana smokers, neither group behaves well. And how smart is it to smoke anything? We noted that marijuana sales won't be legal in New York until at least 2022, so the state is allowing illegal sales. The state doesn't allow that for liquor.

Marijuana is still illegal under federal law, and workers whose jobs are regulated by the feds, like cops and MTA workers would still be fired if they test positive for the drug.