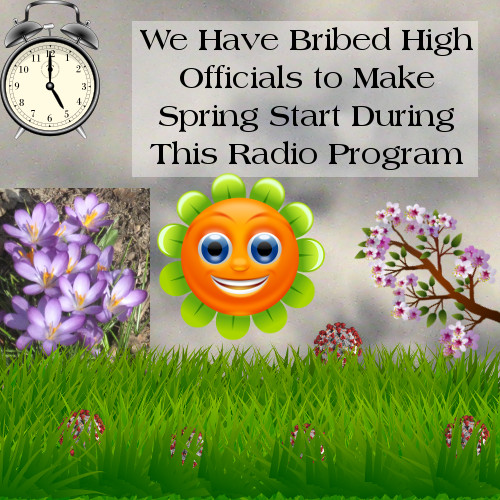 We were able to bribe certain high officials to make sure that the Vernal Equinox would happen during this program! Yeah, you wouldn’t believe the people I had to bribe to get the 2021, Vernal Equinox to happen during our program. It occurred at 5:37 AM, and Spring was here! We managed to time things so that the pre-recorded program aired our celebration just at the time when Spring began.

We talked about the program not airing last week and told folks that they could access the archive of the program here. https://glib.com/botb_20210313.html#program

We talked about R. Paul having gotten his second shot of the vaccine more than two weeks ago and therefore having whatever immunity is conferred by the vaccination. We also talked about Pickles of the North getting her first vaccination against the virus this past week. They're making her wait four weeks to get her second shot.

We talked about the plague of hateful acts, including violence, against persons of east-Asian ethnicity, including this Robert Aaron Long character who murdered eight people, six of them women of east Asian ancestry in the past week. We think some of this can be traced back to Trump referring to the "China Virus," and his tiny, hateful comments.

We talked about Oumuamua, the interstellar object that sailed through the Solar System a couple of years ago. A new theory is that it may have been a block of frozen nitrogen that was sheared off of an ice planet, sort of like Pluto, about 500 million years ago.

We talked about Facebook's a new AI called  SEER that can learn from any random group of unlabeled images on the internet.

We talked about NASA releasing sounds from the Perseverance rover, and we played a little bit of that on the air.