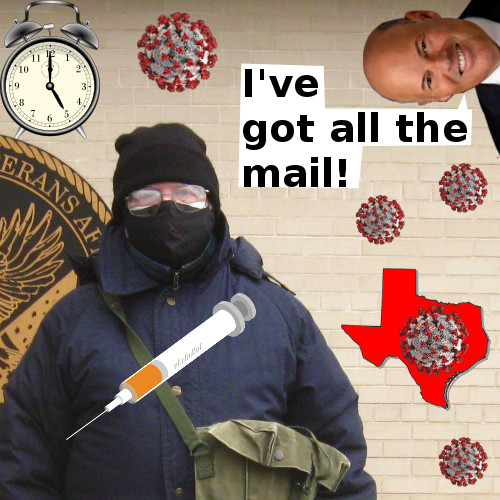 On this program R. Paul talked about getting his second dose of the Pfizer vaccine at the V.A. Hospital, which was a lot less of an adventure than getting the first dose had been. He talked about the aftermath of the vaccination as well.

We talked about The idiocy of the Republican governors of Texas and some other states in opening up everything and lifting mask mandates. President Biden called their actions the result of "Neanderthal thinking." I think the Neanderthals would have behaved better.

We talked about how the mail has been screwed up by Trump megadonor Postmaster General Louis DeJoy, and we caught everyone up on  the efforts to get him out of that position.

We talked about the continued arrests of the January 6, insurrectionists. Just arrested was Federico Klein, who was a Trump appointees to the State Department! Klein is charged with assaulting federal law enforcement personnel during the insurrection. We also talked about one Jacob Chansley who showed up as the so-called "QAnon Shaman" on January 6. We talked about his "muffin defense" by which he apparently hopes to evade a 20 year prison sentence.

We talked about Daylight Saving Time starting next weekend, and the Vernal Equinox happening during our March 20th, program!